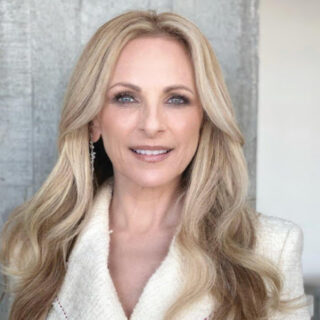 Marlee Matlin is a world renowned actress, author and activist and arguably the most famous deaf person in the country.  While she was born with the ability to hear, she became deaf at 18 months old due to high fever and illness.  Even though she could no longer hear, Marlee considers herself just a regular girl from Chicago – one who loved watching sports on tv with her father. . . and acting in community theater.

It was through acting in one of her ICODA (International Center of Deafness and the Arts) that she was discovered by Henry Winkler, which led to her acting debut playing Sarah Norman in the romantic drama film Children of a Lesser God in 1986.  She won an Academy Award. . . she still holds the honor of being the youngest to receive the Oscar in the Best Actress category.  Interestingly, this time of such success was also a very challenging time for Marlee.   She had recently underwent treatment to overcome drug addiction and was in an abusive relationship with her much older co-star, William Hurt.   Once again, Henry Winkler played a pivotal role in her life.  He and his wife had her over for dinner to celebrate her Oscar. . . and she didn’t leave for 2 years!

Marlee when on to find happiness both in her personal life and her career.   She married Police Officer Kevin Grandalski (yes, in the Winklers backyard) and the couple have 4 children.  She also found further success in television shows such a Seinfeld and the West Wing and published three books.

Most recently she appeared in the film CODA which swept every category they were nominated in, most notably Best Picture.

Marlee has served as an advocate for the inclusion of people with disabilities.  She was appointed by President Clinton to the Corporation for National Service and joined President Barack Obama at the White House in ceremonies celebrating the 20th anniversary of the Americans with Disabilities Act.

Marlee will be joined on stage at the Saroyan by her longtime interpreter and friend Jack Jason.  Marlee will provide a story of a woman who has overcome much adversity and has never allowed her disability to become a crutch.  Her story will uplift and energize us all with her light, humor and positivity!